For the maintenance of good vision and healthy skin, nails and hair. Vitamin A’s most critical role is certainly that of maintaining healthy eyesight. Another important role of vitamin A is its contribution to the growth of new body cells. This process is critically important in the maintenance of healthy nails, tissues, skin and hair.

Beta-carotene is the orange pigment found in green leaves and carrots and is a pro-vitamin A carotenoid.

Beta-carotene is the most potent precursor to vitamin A, but its conversion is limited by a feedback system. If there is a vitamin A deficiency, Beta-carotene is cleaved into two molecules of vitamin A by a specific intestinal enzyme, but if there is an excess of vitamin A, the Beta-carotene functions as a tissue antioxidant, thereby keeping cells healthy. While high dosages of Vitamin A in the retinol/retinyl ester forms have shown toxicity in animals and man, especially during pregnancy, beta-carotene is not associated with vitamin A toxicity due to this feedback system, which is why we at Biogen have combined the safe levels of the 2 forms in this product. 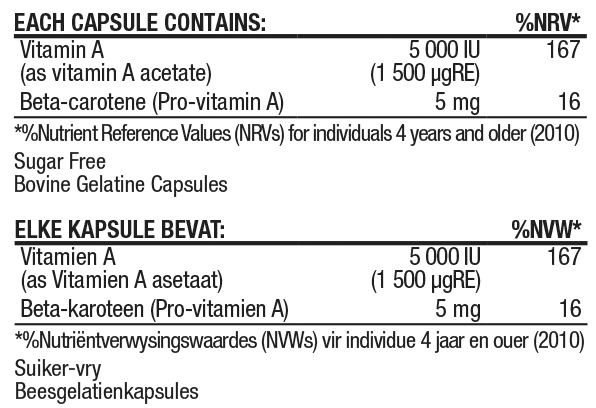